For some reason, most people think that I am an only child. They often sit in shock and amazement when I tell them that I am one of a huge tribe of children. My father, a man who has been married many times and claimed even more children as his own whether they came from him or not; was a firm believer that family is not created by blood, but by love and common experience.

Growing up in my huge “family”, everyone seems to have had a side trade. My father built cars, my mother grows gardens and is an expert lawn manicurist, my blood brother builds homes, my God brother is a bodybuilder, other “brothers” and “sisters” are customizers of every sort. And Me, thanks in part to one of my created by love brothers… J. Oconor Navarro, I create Art.

In High School, Jay and I put together a full production of Godspell. We did everything from building the set, to blocking the play, to arranging the music. Choreography, costumes, rehearsals…it was all driven and arranged by us and all done in our spare time. 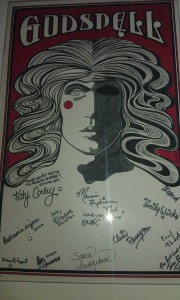 We poured ourselves into that production, and it was the first time I realized that the Arts would always have to play some role in my life. Its when I realized that creating fantasy to be consumed by others was my side trade.

If you counted up the hours I spent at the Navarro house honing my crafts, you would swear I was their long lost 4th child. By the end of the production, I had a room in their house and they had a fixed place in my heart. Jay became more than a friend; he became another big brother that inspired me to always fight for the Art and create beyond expectation.

As with most sibling relationships, Jay went off to college and eventually our contact became less and less frequent. Life and Law School happened and we only saw or spoke to each other on occasion.

Eventually, we have both found our way to New York. While I have left the world of entertainment as a profession and create my Art in very different venues now [this blog for instance], Jay continues to fight for the Art and create beyond expectation for the stage. From Broadway to his classroom at NYU, he continues to inspire and help people find their place in the Arts and learn the noble trade of producing fantasy to let people escape, even for just a little while.

On this day, his born day, he asked his friends to complete the phrase: Remember that time we __________ … I think it only appropriate that I honor his request with a Drink du Nuit and say Remember the time we created our greatest work of Art: A friendship that has survived the ages, evolved as we have, but continues to leave me feeling as though I have another big brother to look up to and one that continues to inspire me to create beyond expectation.

Celebrating his artistry, his pizzazz, and nodding to his Filipino heritage and Mom’s Filipino cooking [ I could go for some of that right now]. I present to you tonight’s Drink du Nuit: The  Bonifacio Sour 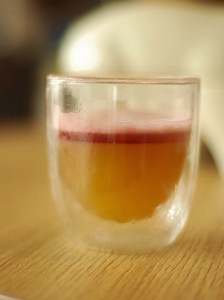 “It is one of the blessings of old friends that you can afford to be stupid with them.”

***This cocktail was created for ‘Cue by barman Enzo Lim of New York City’s Jeepney and Maharlika, as a tribute to the founding member and martyr of the Katipunan, the Philippine revolutionary society founded in the 1890s when the country was still under Spanish rule. The bar is located in an area of The Fort named after the Filipino hero (Bonifacio High Street and Bonifacio Global City).

Have a story you want o share? Have a recipe you’d like to give to the world…Contact DrinkduNuit below and You could be our next Guest Contributor!

This site uses Akismet to reduce spam. Learn how your comment data is processed.